MGP at the RMC

Previous Next
MGP at the RMC

For Sydney Donaldson, a psychology major at Bowling Green State University, the Rocket Mortgage Classic was a chance to network and educate attendees about the Midnight Golf Program. Sydney works as a server at the Detroit Golf Club during the summer and was working a private party during the Classic when she met a couple who work at Quicken Loans. They had picked up MGP bags at the Fan Zone and Sydney took the opportunity to educate them about Midnight Golf, and walked away with the woman’s phone number and the possibility of following up. Sydney hopes to work at Quicken Loans when she is done with school and before she gets her master’s degree.

It was these kind of experiences: networking, writing thank you cards, and the promotion of Midnight Golf, that alumni who volunteered or worked at the Rocket Mortgage Classic credit Midnight Golf for. These life skills, many of them learned as Midnight Golf students, added to the extraordinary experience of being involved in Detroit’s first-ever PGA Tour. 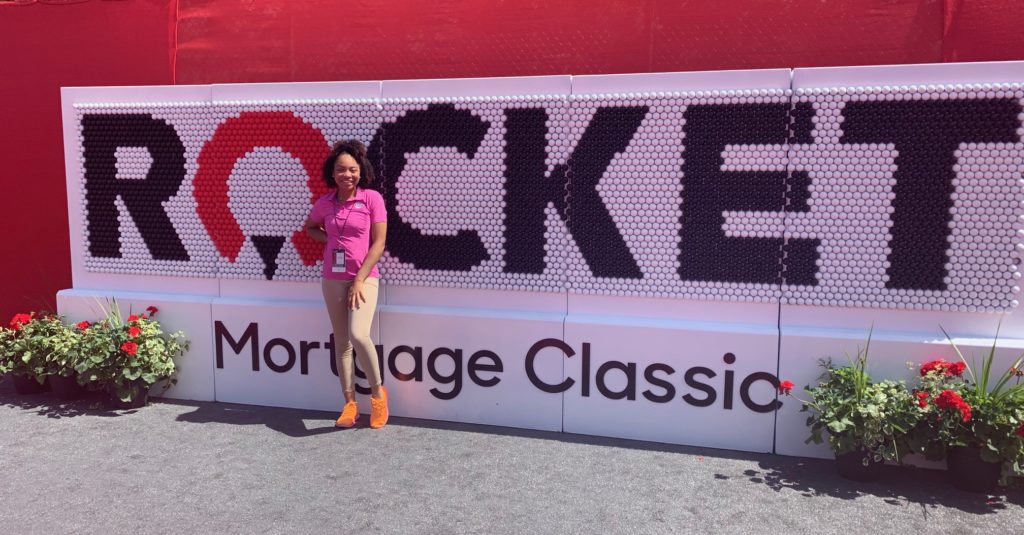 As a primary beneficiary of the Rocket Mortgage Classic, Midnight Golf had the opportunity to invite alumni to volunteer or work at the PGA tournament. MGP alumni participated in all levels of the event, from catering to the Fan Zone, where Midnight Golf had a booth, to PGA Live and Intersport.

Winston Coffee, MGP Student Success Coach, was happy to see so many alumni take advantage of the opportunity.

“We talk to our students continuously about being prepared for opportunities because you never know when they will come,” said Winston. “The Rocket Mortgage Classic gave many of them the perfect platform to showcase some of the lessons Midnight Golf instills. We had students who were able to have dinner with professional golfers on the PGA tour, spend time with global sports broadcasters, network with CEOs, and gain valuable internship experience. They did all of this while standing out in the best ways possible; writing hand written thank you notes, advocating for the program and themselves, and representing Detroit and Midnight Golf in the best light.”

Putting in a Good Word

Sydney (MGP ‘15) served guests throughout the club during the Rocket Mortgage Classic. During her breaks she went to the Fan Zone to help the team of staff and alumni who were promoting Midnight Golf to attendees and players.

“I was spreading the word inside the club to the members and attendees and a couple of players asked me about it,” she said.

Her highlight: Saying hi to Rickie Fowler as she walked past him at a private party. 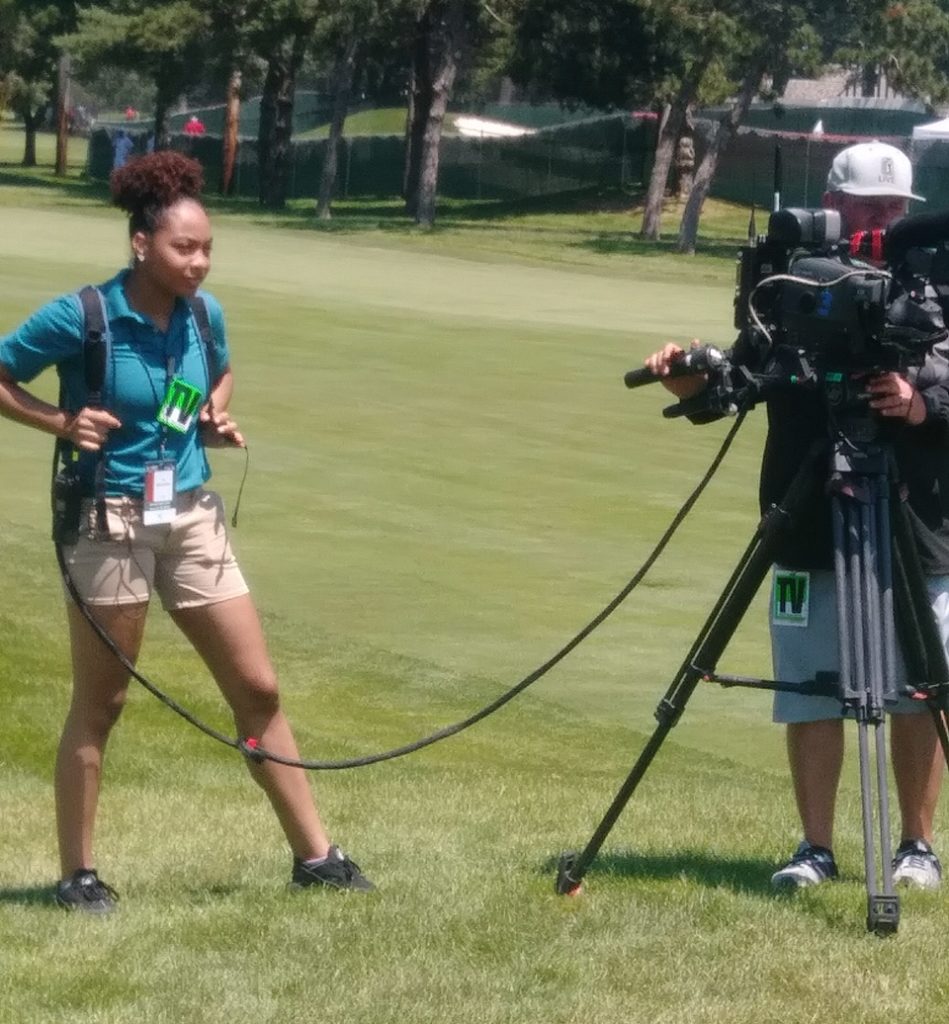 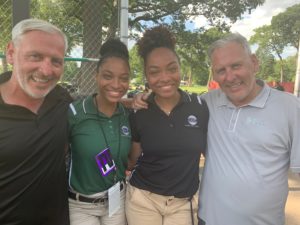 For Norfolk State mass communications and broadcasting major, Jessica Radford (MGP ’16), the opportunity to get behind the camera with the PGA Entertainment Live team was a dream come true. As a camera assistant, she spent 12-hour days assisting with the tripod and equipment and in the production trailer.

The networking and references from the event make the long days worthwhile.

“That’s the field I want to go into. I mainly want to work in sports or entertainment,” she said.

Coming Home to Get Involved 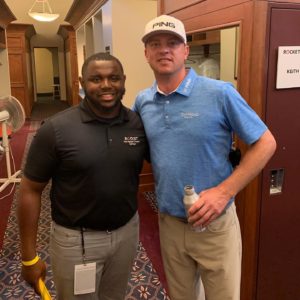 Brandon Willis (MGP ’14) returned to Detroit from North Carolina, where he recently graduated from North Carolina A&T State University. He now works as a graduate assistant coach at the university and has a game day internship with the Carolina Panthers.

The opportunity to work in professional sports was too good to pass up and he was glad the timing with the Rocket Mortgage Classic worked out. The week before the Classic, he helped in tournament operations, setup, logistics and signage and marketing. During the event, he did everything from ticketing to hospitality.

He is proud of his city and of Midnight Golf.

“MGP was there and representing. That was awesome. We had a heavy presence,” Brandon said. “It was major for the inner city. Something to be this close, it really affects the people in the community.”

Brandon networked with anyone he could, including sports agents and even Ricky Romano, winner Nate Lashley’s caddie.

“One of the biggest skills I utilized was being able to take initiative when an opportunity presents itself,” he said. “Knowing that you have the opportunity to make a decision and doing it. These are decision making skills that they teach us.” 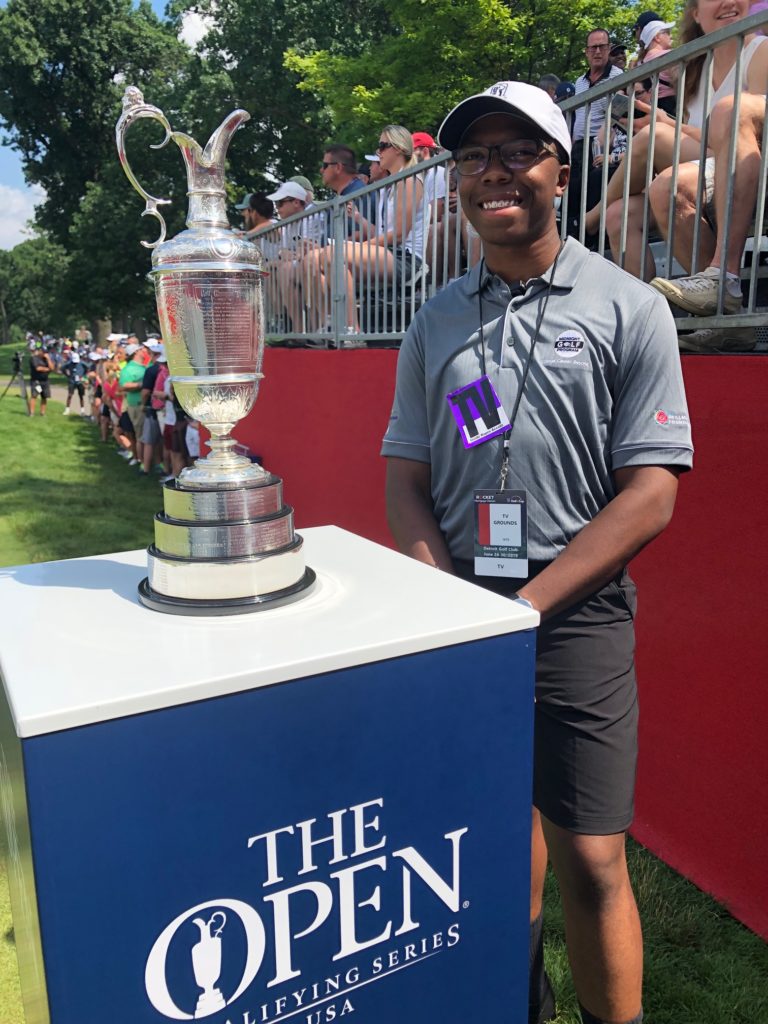 Karl Stafford (MGP ’15) was assigned to assist a cameraman and they followed Bubba Watts and Rickie Fowler for their livestream on the Golf Channel.

The event combined his love of golf with his passion for advocating for Midnight Golf.

“It was a combination – I love MGP and advocating, I caddied before MGP and I love Midnight Golf,” he said.

A highlight: “My cameraman and I had a unique experience we were on the ninth hole on the green waiting and tracking Bubba’s ball. It went straight onto the green and his ball hit our tripod. He came and talked to us.”

He was impressed with the reception the golfers had for the fans.

“They were talking about how they love the Detroit fans,” Karl said.

Karl used many of the networking skills he learned from Midnight Golf.

“I wrote thank you letters to my cameraman and the PGA Tour Live director and they were pleased with the performance of the MGP students. They said they were some of the best people they had ever worked with,” he said.

Karl made his team feel welcome to Detroit on day one.

“I brought the whole team Dutch Girl Donuts to break the ice,” he said.

Giving Back by Speaking Up 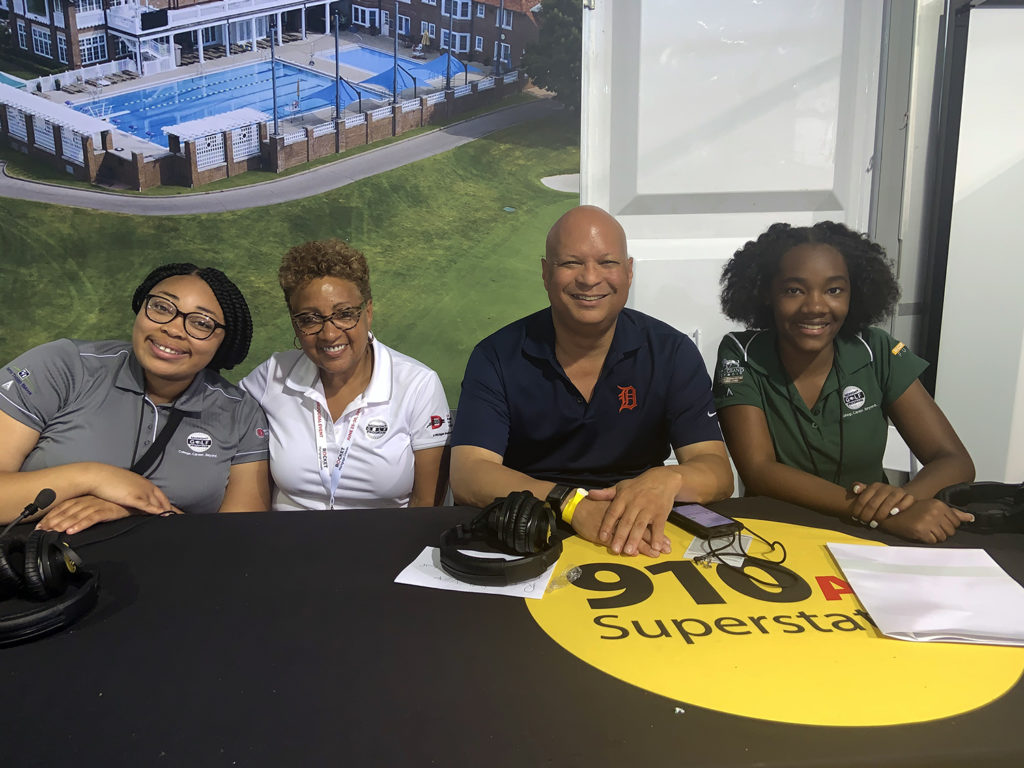 Haley Dishman (MGP ’19) volunteered to help at the MGP booth in the Fan Zone to give back to an organization she credits with teaching her many life lessons. She was able to utilize these networking and communication skills during her time as a spokesperson for Midnight Golf.

“A lot of the communication skills we learned through MGP were applied throughout the time frame of me being at the RMC,” she said. “I also used almost every skill I learned about networking while speaking with the visitors at the table.”

This fall, when Haley starts as an electrical engineering student at Alabama A&M University, she is excited to have made some new contacts from the Rocket Mortgage Classic who may be able to assist her in her studies and future internship or job prospects.

Her highlight: “Ms. Reneé took another student and I to her radio interview on 910 am, and we had the opportunity to actually speak on MGP on the radio, and about what the program was and the impact it has had on us as students in the program.”

PGA Tour Comes to Him

In his first two months on the job the PGA Tour came to Anthony Ward (MGP ’13). Anthony is the Assistant Golf Professional at the Detroit Golf Club, a position he started in May.

He used the communication and networking skills he learned as a Midnight Golf student throughout the tournament.

“I was just trying to make sure all the players were happy and they were well taken care of,” Anthony said. “I pretty much did a little bit of everything.”

He was pleased, but not surprised, that the golfers and other attendees were impressed with the Detroit Golf Club and the city.

“They were amazed at how well kept our golf course was and how this is a hidden gem in our city.”

His highlight: Having dinner with Harold Varner III.

“He is just a regular person,” Anthony said. “They are all normal individuals with great abilities playing golf.”