Previous Next
A Dream Come True 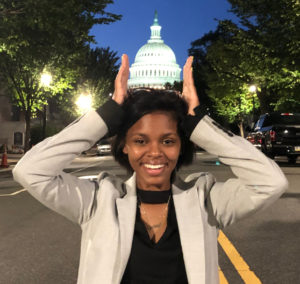 For eight weeks this summer, Cydney Gardner-Brown (MGP ’17) witnessed history in the making and fulfilled her dream of working on Capitol Hill. As an intern through the Congressional Black Caucus Foundation, she worked in the office of Representative Brenda Lawrence of Michigan’s 14th District.

She lived with her fellow interns in the dorms on the campus of George Washington University and enjoyed the bonding and friendships that came from an intense summer together.

She credits the repetition of the skills she learned during her time as a Midnight Golf student with helping her during the internship.

“I’m at the point in my life were I can’t go into a situation without thinking of the networking opportunity,” Cydney said. “Midnight Golf really helped me focus on asking the questions that matter.”

A highlight for her was attending the congressional hearing regarding House bill “HR-40,” which requests consideration for economic and social reparations for African American descendants of slavery.

“It was monumental that they were having the conversation in Congress,” Cydney said. “We may be part of the generation that sees this happen. It was cool to be there.”

At the hearing, Cydney was captured in the background of a photo of Delegate Stacey Plaskett of the U.S. Virgin Islands, which appeared on the front page of the New York Times.

Cydney will return this fall to the University of Michigan, where she is majoring in Public Policy with a concentration in education. This summer program dovetailed on a month-long study abroad in Paris. She flew directly from Paris to Washington, DC to start her internship.

After graduation, Cydney wants to return to work on the Hill in public service or at a non-profit. She is exploring working for an international non-profit next summer.

Cydney’s advice for gaining an internship on Capitol Hill is to apply to multiple programs.

“Put your best foot forward,“ she said. “Apply to five things. Make the odds in your favor.”

Donate today to make a difference in the lives of Midnight Golf students like Cydney.

GIVE NOW
Go to Top