Kennard up for NFL Man of the Year

Previous Next
Kennard up for NFL Man of the Year

“To me, the Walter Payton Man of The Year Award stands for excellence on and off the field,” said Kennard. “As I reflect on every player who has ever won this award I see one common thread; a group of men who are exceptional football players, but at some point made the realization that real success is helping others succeed and grow. Their life’s work reflects this realization. Youth mentorship, education and literacy have been a passion of mine since entering the NFL six years ago and I’m excited to shed light on the amazing organizations I have had the honor of working with here in Detroit. I want to personally thank my family, Mrs. Ford, Coach Patricia, all my teammates and the community relations department here in Detroit.” 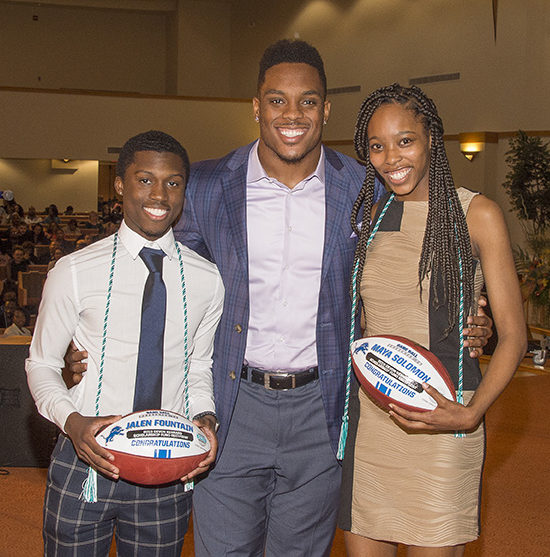 Since joining the Lions in 2018, Kennard has worked closely with the Midnight Golf Program in Detroit and created his own “Devon Kennard Scholarship Fund” in 2019 for students involved with the organization. Through mentorship and skill building, the Midnight Golf Program helps under-served youth transition from high school to college and into a professional career. Kennard’s scholarship includes a detailed application process for students, as well as an essay submission that is reviewed and selected by Kennard himself.

“We are immensely grateful for Devon’s support of the Midnight Golf Program,” said Reneé Fluker, MGP founder and president. “Our work to ensure the college, career and life success of Detroit area students closely aligns with the way he wants to make an impact through his professional platform. It also fits in the way he and his family are making an impact as he established a scholarship fund for the students of Midnight Golf to assist in their pursuit of college success. More than a financial investment, he takes the time to meet and forge meaningful relationships with Midnight Golf students.”

For the second year in a row, all 32 team winners will be highlighted as nominees and recognized for their important work during the weekend leading up to Super Bowl LIV. The 2019 Walter Payton NFL Man of the Year will be announced during NFL Honors, a two-hour primetime awards special to air nationally on Feb. 1, the eve of Super Bowl LIV, on FOX. NFL Honors will be at the Adrienne Arsht Center in downtown Miami.

All 32 nominees will receive a donation of up to $50,000 in their name to their charity of choice. The winner of the Walter Payton NFL Man of the Year award will receive a $250,000 donation to the charity of their choice. All donations are courtesy of the NFL Foundation and Nationwide.

Fans are encouraged to participate in Nationwide’s 5th annual Charity Challenge. Fans can vote on Twitter by using #WPMOYChallenge and including “Kennard” in the tweet. The player whose name is tweeted the most between Dec. 12 and Jan. 12 will receive a $25,000 contribution to their charity of choice, while the second and third place finishers will receive $10,000 and $5,000 donations, all courtesy of Nationwide.

More information about the Walter Payton NFL Man of the Year Award can be found at http://www.nfl.com/manoftheyear.